Trail of the Coeur d’Alenes

The award winning 72 mile paved, non-motorized, mostly alpine and basically flat rail trail is a very narrow Idaho State Park. It travels downhill from the Plummer prairie over the expansive Chatcolet Bridge along the Coeur d’Alene Lake following the flow of the Coeur d’Alene River though a collection of chain lakes and farmland until it becomes more forested along the river which divides into two confluences and following the South Fork of the Coeur d’Alene until it terminates after climbing up to the small quant City of Mullan near the Montana border. This is a fully developed trail with tables, benches, outhouses, kiosks and formal trailheads with lots of parking. The trail was part of an environmental remediation project so the State asks that you stay on the trail, wash hands and face before eating and eat at designated waysides and trailheads, carry water with you for drinking and washing. There is no fee to use the trail.

The Trail of the Coeur d’Alene is open year around and the most easterly end of the trail is groomed for snowmobile traffic between Wallace and Mullan which also means its open for cross county skiing. For those advanced users seeking to ride centuries Wallace to Harrison or Kellogg to Chatcolet will provide you with that experience. While nothing beats a romantic fall peddle from Pinehurst south the entire trail is a happy, healthy wholesome experience.

Skill Level: Easy/beginner and child safe
Animals: All dogs must be on a leash
Social Media Photos: #coeurdalenetrail

Directions to the Trail

Trail is closed for bicycling

Purchase the digital GPS file(s) for this trail

This digital product includes an Avenza Map of this trail. You can use the Avenza Map on your smart-phone while offline to track your progress and annotate your trip. This download also includes GPS data files for use in other handheld/portable GPS. (ESRI Shapefiles, GPX, GeoJSON, KML)

Get your Avenza Map App here:

off the Trail of the Coeur d’Alenes 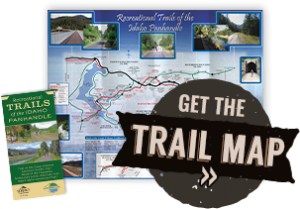 Get the latest edition of our full-color trails map Recreational Trails of the Idaho Panhandle mailed directly to you, absolutely free of charge.

This trail was awesome

This was a great ride!